How To Operate A Commercial Truck: Advanced driving skills are needed to drive a heavy vehicle, whether it be a bus, a straight-body truck or a tractor and trailer.

Since these vehicles are very large, a driver must gain experience handling them. When turning a large vehicle you may have to turn the steering wheel several times (sometimes as many as eight times) to complete a left or right turn.

Most vehicles are equipped with power steering and adjustable steering wheels that make operating the vehicle easier and more comfortable for the driver. It is recommended that the steering wheel be held with your hands at the nine o’clock and three o’clock position.

This will allow for good control and, in the event of a collision and the vehicle is equipped with an airbag, it will inflate without injuring or being obstructed by your arms.

The driver of a vehicle should never turn the steering wheel with one hand (palming the wheel) or with one finger as they may not have full control of the vehicle.

To set a vehicle in motion, you have to accelerate (start) smoothly and gradually to avoid jerking the vehicle. The driver’s foot should lie flat on the accelerator with the heel on the floor.

For optimal engine performance, the driver should avoid abruptly applying and releasing the accelerator. Drivers should accelerate slowly and steadily when starting from a stopped position.

Drivers have more control over the vehicle. If the vehicle is over accelerated, particularly on poor or slippery road surfaces, the drive wheels can lose traction and could cause loss of control.

The clutch makes it possible to disengage the transmission and the engine. By pressing the clutch pedal, the connection is broken between these two components, allowing the driver to change gears. The clutch pedal must be pressed with the left foot and held to move the gear lever.

Avoid releasing the clutch too quickly. This can damage components leaving the vehicle inoperable.

Also, do not let the clutch out too slowly or release it only enough to hold the vehicle from rolling on a hill when stopped. This will cause the clutch to heat excessively and wear out prematurely.

Some vehicles are equipped with a clutch brake to stop the rotation of the main shaft gears in the transmission when the clutch pedal is pressed all the way to the floor.

Most heavy vehicles with manual transmissions require double-clutching to make changing gears easier. Double clutching is simply depressing the clutch for each movement of the gear shift lever.

The movements need to occur at the same time (synchronized) so you will need to practice before this skill can be mastered. This technique must be used for shifting both up and down.

Even with synchro-mesh gears, shifting can be faster and smoother with the double clutching method.

It should be noted that there are manual transmissions that do not require double-clutching. Consult the operator’s manual for the equipment being driven.

• Release the accelerator and at the same time press down the clutch pedal. 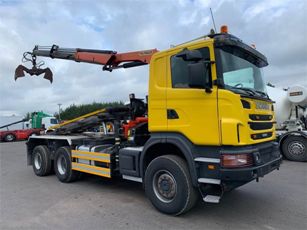 • Increase or decrease the engine revolutions per minute (rpm) required for the next gear. The engine speed must be matched to the gear being selected — press lightly on the accelerator (to increase engine speed for downshifting) or release it slightly (to decrease engine rpm for shifting into a higher gear). This skill will come with practice.

• Press down on the clutch again.

• Shift into the desired gear.

• Release the clutch pedal and press down on the accelerator at the same time. If the transmission remains disengaged for too long when double-clutching, it may be hard to engage the gears. If this happens:

◦ Shift back into neutral.

◦ Press down on the clutch.

◦ Try shifting into a lower gear as the vehicle speed has most likely slowed.

When to change gears

There are two ways of knowing when to change gears:

1. According to the engine speed calculated in revolutions per minute (rpm): Engine speed is determined by the gear selected and by the amount of pressure on the accelerator. To make efficient use of the engine’s power, the engine speed and vehicle speed must be coordinated.

Generally the higher the engine speed, the more power there will be in a given gear.

To know when the gears should be changed, glance at the tachometer and when the desired rpm is reached, change gears. Refer to the operator’s manual for the proper rpm ranges for each gear on the vehicle being operated.

2. According to the vehicle speed measured in kilometres per hour (km/h): If driving a vehicle that is not equipped with a tachometer, the gears will have to be changed in reference to the vehicle’s speed. The operator’s manual for the vehicle being driven will indicate the speed (km/h) range for each gear.

An engine that does not turn over fast enough tends to jerk or lurch and can damage the vehicle. An engine that turns over too fast, on the other hand, consumes more fuel than is necessary and does not provide any more power than it would at a lower rpm.

Motor vehicle engines have a speed range within which they operate efficiently. It is often between 1,200 and 1,800 rpm, although there are some engines that operate at lower speeds.

Consult the operator’s manual for the equipment being driven for the recommended rpm ranges for each gear. The tachometer should be used to know when to change gears as it is more precise than using the sound of the engine or vehicle speed.

Many vehicles have transmissions that change gears automatically in response to speed and acceleration, by means of mechanical, electrical or hydraulic controls. Drivers of such vehicles can also shift down to a lower gear for increased braking power when descending a hill.

Downshifting prevents the transmission from automatically changing into a higher gear, keeping the vehicle speed slower.

This can be very helpful in keeping the vehicle’s brakes cooler as they will not have to be used as often when descending a steep hill. This is an example of how the gears on an automatic transmission could be used:

• N (neutral): for starting the engine, stopping for an extended length of time and parking

• R (reverse): for backing up (bring the vehicle to a complete stop before changing from a forward gear to reverse and vice versa)

• 2: for driving on slippery surfaces or up or down steep inclines

• 1: for driving very slowly when off the highway

Consult the operator’s manual for information on the correct operation of the transmission.

The gear shift lever is used to change gears. The gear you choose affects engine performance. The right gear depends on the transmission, the engine it is attached to, the load the vehicle is carrying and the highway being driven on.

Operating a manual transmission and engaging the right gear at the right time requires a lot of practice and skill.

Since there are many different types of transmissions, consult the operator’s manual for the vehicle being driven.

Shift before starting down a hill

Before starting down a hill, select a gear and slow down to a speed that can be controlled without hard braking or the brakes may overheat and lose their braking power.

Shift before entering a curve

Slow down to a safe speed and downshift to the correct gear before entering a curve. The correct gear will allow the engine power to be used to keep the vehicle stable while driving through the curve and provide good acceleration out of the curve. Driving through curves is explained in depth later in this manual.

Shift before or after railway crossings

You should not shift gears when crossing railway tracks. When approaching a railway crossing, the vehicle should be placed in an adequate gear that will allow the vehicle to completely cross the track.

By not shifting gears when crossing railway tracks you avoid the chance of missing a shift, stalling the vehicle and/or blocking the railway tracks.